The Killscreen gang have a need… a Need for Speed! In 2014, DreamWorks released a film adaptation of the popular racing games.  Many consider it the most faithful adaptation of a video game into a movie yet, what with it featuring important staples of the series such as cars… and racing… and more cars.  Oh, and don’t forget about the racing!  Listen to three knuckleheads who don’t know Corollas from shinola talk about a sexy car movie, which VERY loosely based on the racing games by Electronic Arts, and starring Breaking Bad’s Aaron Paul, acting with much more effort than the movie deserves.

If you’ve never listened to Killscreen Cinema, we are the premier podcast when it comes to covering the niche genre of video game movies.  We cover everything, from terrible adaptations like the Super Mario Bros movie to movies about video games like The Wizard. Subscribe to us on iTunes or SoundCloud, like us on Facebook, and follow us on Instagram!

Music: “Mashin’ on the Motorway” by DJ Shadow 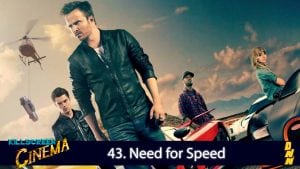