We’re joined by comedian Melissa Doran to discuss the new monster movie, starring Dwayne “The Rock” Johnson, that most people don’t even realize is even based on a video game – Rampage!  After a chemical alters the genetic makeup of three wild animals (an albino gorilla, a wolf, and a crocodile), their size and aggression begin to grow out of control. A primatologist and a former scientist team up to find a way to stop the monsters! 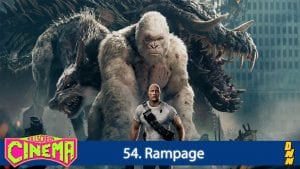