The Killscreen Cinema gang is joined by Project Improv member, Charity Murphy, to discuss the anime Fatal Fury: Legend of the Hungry Wolf.  Based on the SNK arcade game, Fatal Fury is about two brothers named Terry and Andy Bogard who vow vengeance after their adopted father is murdered by a crime boss named Geese Howard.  After the Bogards part ways to train separately for 10 years, they return home to get their revenge.  Meanwhile, Geese is obsessed with learning a secret technique only known to the Bogards’ master, Tung Fue.  However, Tung has decided to teach it to only one of the Bogards, unless Geese destroys them first! 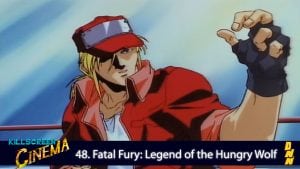