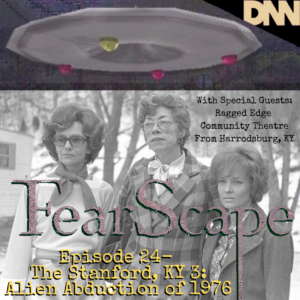 This week’s FearScape is a very special episode. Join the Spooky Crew as they discuss one of the most documented Alien Abduction cases in the United States and it happened in Stanford, KY in 1976. 3 women claim to have been abducted while driving home from dinner and their story gets even crazier after the abduction is over! Brad and Stefan are also joined by some folks at Ragged Edge Community Theatre in Harrodsburg, KY (Santosh David Smith, Alan Barlow, Shaelyn Catron) who are putting on a production of the play, High Strangeness, which is inspired by the events of the Stanford 3. This is one not to miss! And stick around after the end credits for some bonus recordings that hit the editing floor on the radio version! And as always remember to hold your blankets extra tight as Brad, Stefan, Santosh, Alan, and Shaelyn take you deep into the FearScape!