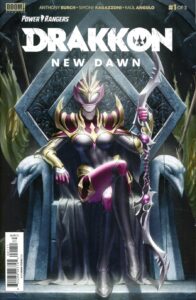 Power Rangers Drakkon New Dawn is the continuation of the most epic Power Rangers story ever told! Written by Anthony Burch and drawn by Simone Ragazzoni; after the defeat of Drakkon, the world is still in disarray. Kimberley (Ranger Slayer) has been leading the fight against Drakkon’s remaining forces with the help from the Resistance and the newly joined Sentries that left Drakkon to fight against him. But trust is an issue with those who have been accustomed to seeing the Sentries as Drakkon’s stormtroopers. But that mistrust has to be put aside when Kimberly finds out about the Deadlock, an impenetrable prison Drakkon made to house his most troublesome enemies. She makes it her personal mission to free those who were oppressed by Drakkon to prove she’s nothing like him. But within it’s walls, she finds an Unknown Ranger who is covered in restraints at the center of the Deadlock. Who is this new Ranger and why is he so important that Drakkon is keeping him under such heavy lock and key? This 3 part new mini-series can answer it all! Check it out! 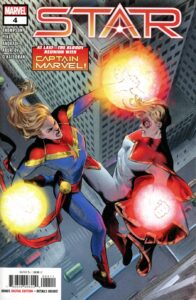 Star #4 is the battle we’ve been waiting for! Or, if you haven’t been keeping up with Kelly Thompson’s latest book, it’s the battle you should’ve been waiting for. Reporter Ripley Ryan was shadowing Captain Marvel when the hero was sucked into an intense battle. Blaming Carol for her near death experience, Ripley sets out to take revenge. Carol defeats her and throws her in the raft, but Ripley wakes up with some brand new super powers. Her debut solo series, Star, has been about Ripley dealing with the fallout of fighting Earth’s Mightiest Hero. Between losing her reporter job, going on the run, dealing with PTSD, and trying to control her new powers, Ripley has her hands full. Kelly Thompson does an amazing job of writing a flawed but sympathetic protagonist. Despite everything Ripley has done it’s hard not to root for her, especially after we see events from Captain Marvel from her perspective rather than Carol’s. Issue #4 of Star shows Ripley’s past finally catching up to her in the form of Carol Danvers. Although the fight scenes in this issue are great, it’s Ripley’s character that really shines. Watching Ripley confront her demons and desperately try to continue running from them is extremely interesting. I usually don’t care for the whole “the hero is actually the villain” trope, but Thompson does an excellent job showing how, from Ripley’s perspective, Carol is the villain. Check out Ripley’s adventures for yourself in Star #4!