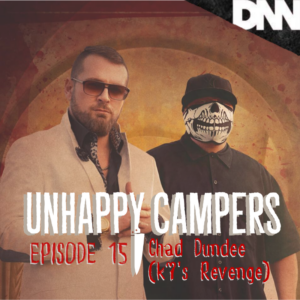 Welcome back Campers to another edition of Unhappy Campers!!! This week the boys had a chance to interview Writer/Director/Actor/Producer/Musician/Bad Ass Moutha Trucka, Chad “Chadillac” Dundee, of DLMF Cinema and the film K-7’s Revenge! We talked about how he got his start, his influences, his company, his music, and especially this amazing film, K-7’s Revenge. We also played Shag, Marry, Kill (Horror Edition) with him and this week our picks were Grampa from Texas Chain Saw Massacre, The Vampire Lestat from Interview with a Vampire, and the Deadite version of Ash’s girlfriend, Linda, from the original Evil Dead film. So tune and check out our answers and remember campers to always CAMP UNTIL YOU DIE!