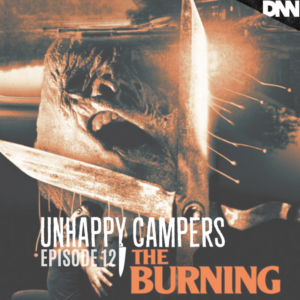 Welcome back Campers to another frightful edition of Unhappy Campers! This episode your head counselors discuss a Slasher cult classic from 1981, The Burning, featuring the film premieres of Jason Alexander (Seinfeld) and Holly Hunter (Batman V Superman). It features a camp maintenance man named Crospey who was set on fire by young campers to only return to the camp years later and take his revenge with some garden shears! Also on Shag, Marry, Kill, the boys discuss their picks between the Brothers from Wrong Turn, Buffalo Bill from Silence of the Lambs, and Jigsaw from the Saw franchise. And finally, don’t forget to camp until you die!