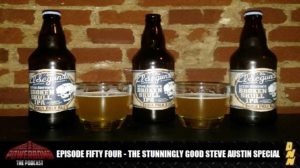 In this episode…the fellas pay homage to the Texas Rattlesnake in the only way they know how…by drinking his beer and talking about him! That’s right! Steve and Bryan got their hands on some Broken Skull IPA (Steve Austin’s beer) and they enjoy ever sip while talking about different dream matches for Steve Austin if he came back today! That’s not all, Austin was almost given the infamous name of “Fang McFrost” so Powerbomb came up with some other awful names! All that and more on this episode of POWERBOMB!