The Killscreen gang, along with comedian Tyler Gooch, take on the virtual insanity of Spy Kids 3: Game Over directed by Robert Rodriguez.  In the third installment of the trilogy, Juni Cortez returns to the agency after an extended leave when he learns his sister Carmen’s mind has become a prisoner in a virtual reality game created by a madman named the Toymaker (Stallone).  Meanwhile, grandfather Cortez teams up with Juni to get revenge on the Toymaker for crippling him years ago. 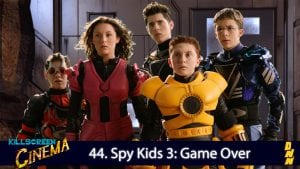