It’s been a year since we watched the first Resident Evil film, so it’s BOUT TIME we watched the sequel!  Alice (Milla Jovovich) returns to escape the zombie infested Raccoon City.  Her only hope is to find a little girl, whose father has the means fly them all out of the city.  However, Umbrella has released a vicious monster named Nemesis to hunt Alice down!  Joining us this episode are comedians Sean Smith and Patrick Passafiume, hosts of the sketch comedy podcast Bout Time! 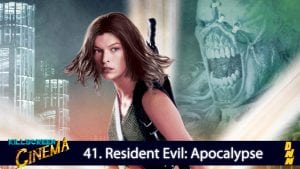