Killscreen Cinema is joined by comedian/musician Chris Vititoe, creator of the delightfully bizarre live puppet show Lil Andy, to discuss a delightfully bizarre hidden gem, Cloak & Dagger (not the Marvel characters). A boy named Davey stumbles into a dangerous conspiracy when he comes into possession of a seemingly normal Atari game. However, the cartridge is being sought after by murderous spies, who want to sell the top secret military information that is stored in the game. Davey’s only hope of survival is by following the advice of his imaginary friend, a badass soldier named Jack Flack!

Killscreen Cinema covers the niche genre of video game movies.  We discuss adaptations like the Super Mario Bros movie to films like The Wizard. If you enjoyed our guest, check out the previous episode he was featured in, Tron.  Subscribe to us on iTunes or SoundCloud, like us on Facebook, and follow us on Instagram or Twitter!  Like our rad logo and album cover?  Check out https://wheedesign.com and https://whee.tv for more great geeky designs by Patrick Hiller! 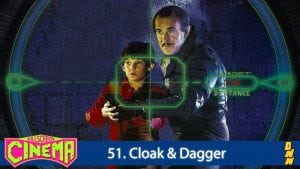