The Killscreen gang discuss the new movie sequel Jumanji: Welcome to the Jungle, starring Dwayne “The Rock” Johnson, Jack Black, Kevin Hart, and Karen Gillan! In the film, four teenagers are sucked into Jumanji, which has transformed into a video game. However, they then have to work together to survive the harsh jungle world and lift a curse!  In addition, the 8-bit cover of “Welcome to the Jungle” at the end of the episode is  by 8-Bit Universe! 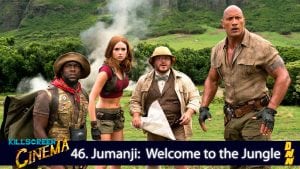